Singer Reimagined is delighted to open doors of AGENHOR workshop where our AgenGraphe 6361 movement is developed and our timepieces are assembled. We will introduce you to the most significant chronograph since the creation of the chronograph.

To make readability easy on the front side of our timepieces it had to be complicated on the back.

When you turn upside down our Singer Track1 you will unveil a piece of art.

In fact, under the screwed sapphire crystal back-case, you will discover a pure beauty. The 477 components, 67 jewels and two barrels are combined together to rhythm the heartbeat of our watches.

Keep your outdated chronograph for the near future museum pieces, with the AgenGraphe, Singer Reimagined presents the future of chronographs.

From a technological and mechanical perspective, the AgenGraphe is a remarkable achievement in which every detail possesses distinguished elegance.

If you own a Singer Track1 you would be delighted to discover and to understand its mechanical function. If you are a watchmaking passionate what follows would make you quake with pleasure.

Since the creation of the chronograph by Louis Moinet in 1816, very little has changed on the most useful complication in watchmaking.

So, what’s new with the AgenGraphe?

Absolutely EVERYTHING. It is revolutionary!

Singer Track1 Vs a Traditional Chronograph

But first, one must understand chronograph’s utility before to unravel the mystery of its function.

A Chronograph is the instrument that allows elapsed-time measurement.

Since its creation, people would look for the information spread through several counters on their chronograph’s dial.

Reading elapsed time on multiple sub-dials is not easy nor intuitive.

That’s the starting point. So, we aimed to imagine a design that allows an easy and trouble-free way to read displayed information.

Therefore, we inverted priorities adapting the way people read the time of the day in comparaison with elapsed time.

At first, Marco Borraccino ambitioned to clean the central dial from any other data. He imagined a central dial exclusively dedicated to the elapsed time measurement.

To be clearer, the central dial which is usually used to indicate the time through 3 hands on SR Track1 watches, has become a 60’ scale central counter to indicate chrono functions. Using the three same traditional hands (seconds, minutes and hours) for elapsed-time measurement we read the elapsed time the same way we read a regular watch.

Subsequently came the idea of the two rotating rings on the periphery of the central dial, indicating civil time, allowing for a clear and definitive separation between time of the day and elapsed time indication.

At Singer Reimagined in collaboration with AGENHOR, the design of the movement is totally reshaped. Our integrated chronograph is composed of 6 units as follows:

The annular movement (donut-form), the chronograph mechanism (heart unit), the clutch, the control unit, the automatic unit and finally the oscillating weight unit. 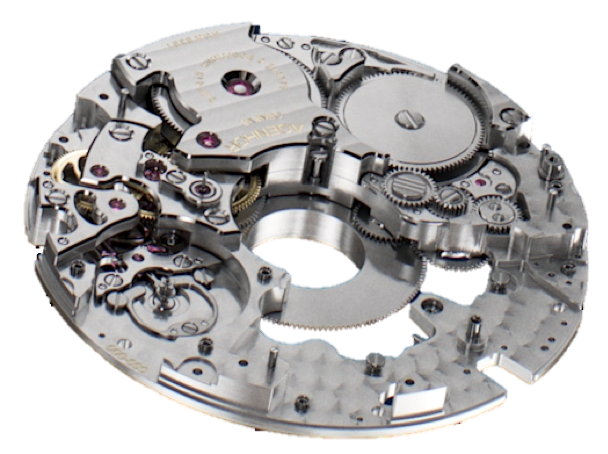 This unit has been patented by AGENHOR. Its construction has been imagined as a donut-form with an open space (a hole) in the center dedicated to the three-level chronograph mechanism (the heart).

This unit is running permanently for timekeeping and for empowering the heart when the chrono function is ON.

Placed in the center of the caliber, the three-level heart (for seconds, minutes and hours) will measure the elapsed-time.

The hands are connected to the center and will point at a one and only scale on the central dial.

At this point, it is necessary to highlight the difference between a common chronograph movement and the AgenGraphe 6361.

A regular chronograph has a wheeling system with a pin. The pin swipes minutes and hours which can involve a risk of legibility error. 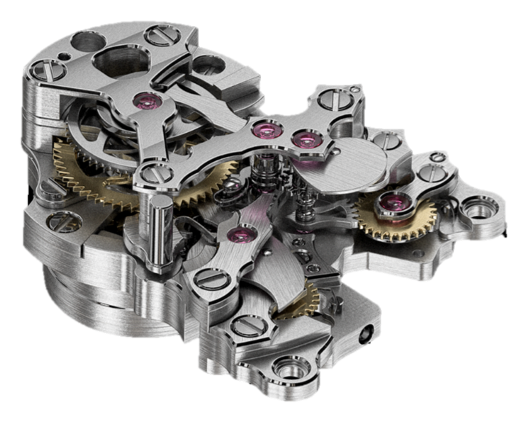 Explanation: When running, the seconds wheel will swipe thanks to a small pin (finger), the minutes wheel which drives the move of the minutes hand before seconds hand has finished its full rotation. 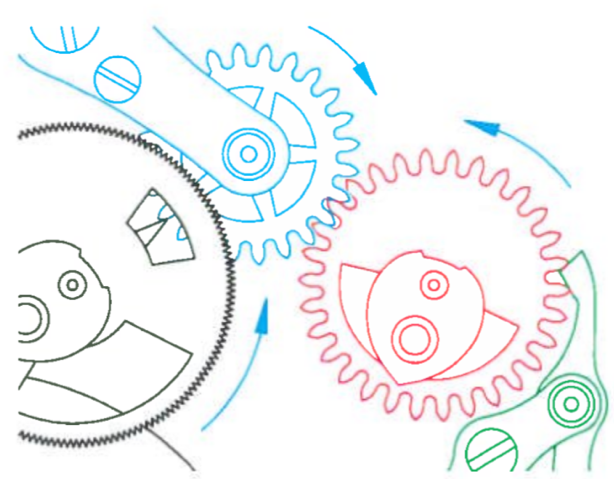 This unit is the link between the annular movement and the chronograph mechanism. 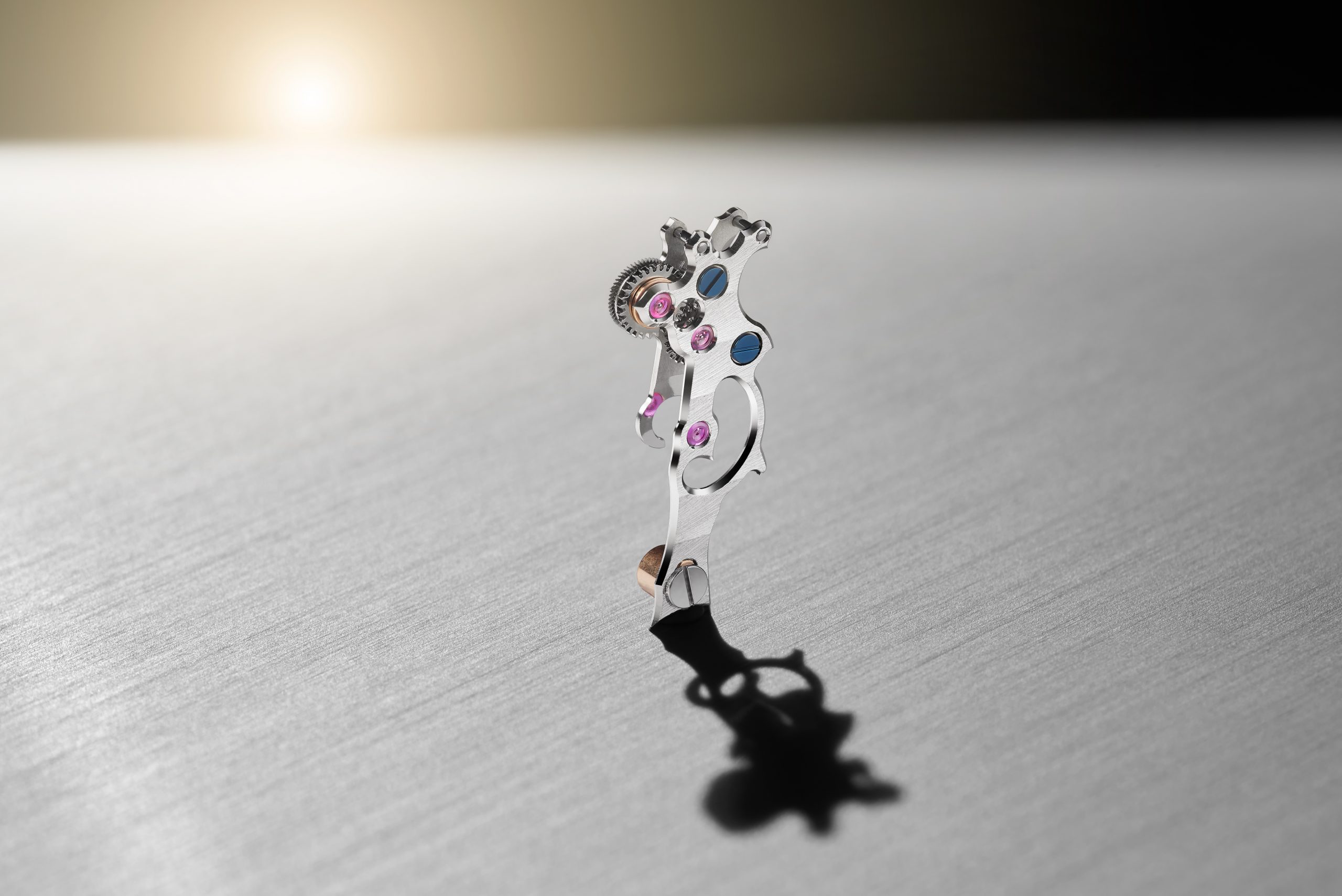 Placed between the Heart Unit and the donut-form mechanism, The AgenClutch is a toothless clutch device that allows seconds hand sweeping. In addition to that, this unit has very little impact on annular movement energy.

Composed of several levers and rockers (scales) combined to the column-wheel system.

The Start/Stop button will involve the rotation of the column-wheel which controls the brake and the clutch.

On the left side of the watch case, is positioned the RESET button that can be engaged only when the chronograph function is off. This button will release the brake by immediately activation of the reset pin. All watch hands will point, then, to 60’.

It connects the oscillating weight with the ratchet (wheel necessary for winding the watch).

While moving the oscillating weight – placed between the dial and the caliber – produces automatic unit rotation in either direction. Thanks to the Magic Lever system direction is corrected.  The ratchet will rotate in a unique sense of direction. All this in order to wind the watch. 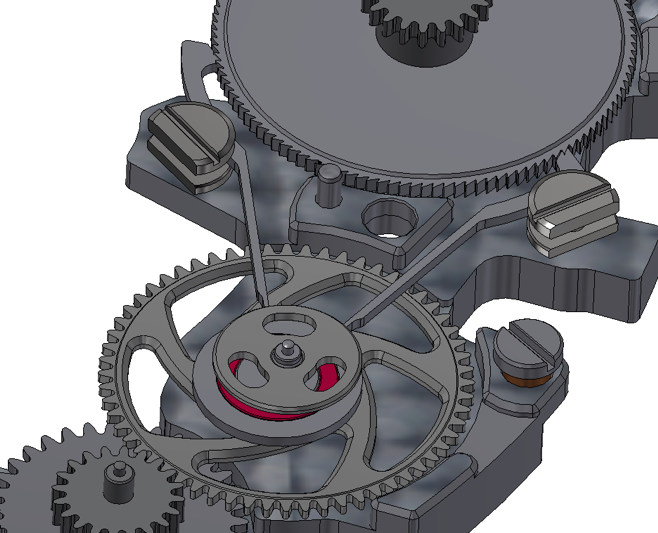 Hours ring (the outer one) spins during 12h thanks to the toothed hours wheel (in yellow on the picture). 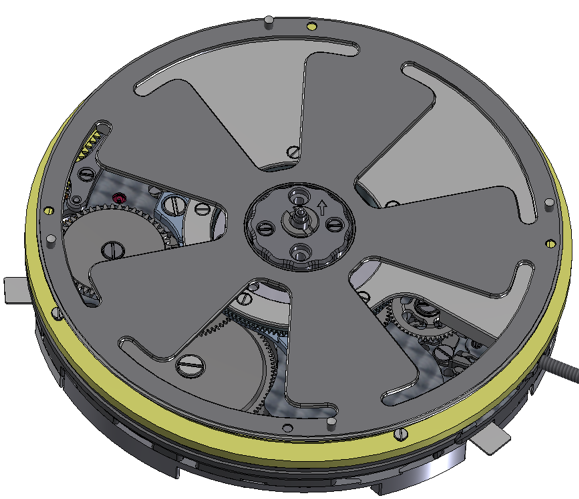 As you may appreciate in the picture above, the oscillating weight is placed quite unusually on caliber’s dial side. That’s another specificity of the the Agengraphe movement, allowing to appreciate the beauty and complexity of it on the back of your Singer Track1 watch.

In fact, much of the success of the AgenGraphe 6361 caliber rests in the harmony combined with the effectiveness of its components.

Much has been said and written about this revolutionary movement. To capture its complexity, one must see it and try it on the wrist.

A Singer Track1 cannot be described, it has to be experienced… like an encounter!